Married with Children Wiki
Register
Don't have an account?
Sign In
Advertisement
in: Character, Main Character, Bundys,
and 5 more

"Daddy, it is so hot out here you could lay an egg on the sidewalk!"

Married with Children
Top of the Heap

Kelly Bundy is the eldest child of Al and Peggy Bundy, the sister of Bud Bundy, and is notorious for her extreme stupidity (which may or may not have been inherited from her father) and promiscuity (which may or may not have been inherited from her mother), much to the dismay of Al. In the early seasons Kelly was also notable for a publicly expressed dislike of her family, and shame in being a Bundy (once regarding being called a Bundy a fightable offense), but has always disregarded her own safety, popularity and opinion in order to rescue or avenge them in some sort of fashion. Kelly also is well known for holding the comic strip of the over-eating cat, Garfield, reading aloud (while horrendously mispronouncing) the words.

Kelly Bundy was born to Al Bundy and Peggy Wanker on November 27th of 1971. It has been mentioned in several episode that she was conceived in Al's Dodge[24][28], and in one particular episode, conceived the night Al scored his Four Touchdowns while celebrating with his then girlfriend, Peggy at a drive-in theater. [29] (Though if she was conceived on the night Al scored four touchdowns, that would mean she was born closer to August 1967).

But in one case, Al clearly stated that Kelly was conceived at home while he was watching the television series, Get Smart and had to put his forearm in Peggy's mouth so he could hear the show's dialogue.[30] (though the series had already ended in May of 1970, more than a year before Kelly's listed birthdate)

In the MWC comic book special, "Father Knows Worst", the flashback to Kelly's birth states that she was born in 1973 at Chicago Memorial Hospital.

When Al finally took Kelly home from the hospital, he had accidentally left her on top of the car roof and was also about to drive off without Peggy. [31]

She already appeared to be a student at Polk High School at the beginning of the series. She graduated from the school in 1990, though it was mentioned in several episode that she was held back. She also graduated late due to her mother (who was also taking the class as she failed it and didn't officially graduate in the 1960s) swapping out Kelly's final project (a plate of Jell-O) with hers (crown rack of lamb that was ruined due to Al) for their Home Economics class. This allowed Peggy to officially graduate from Polk High with the others, while Kelly was forced to take a summer remedial class.[32]

During her senior year, she begins working, first as a "Rock Video Slut" in a music video for the rock band, The Guttercats and later, interning as a weathergirl for Channel 83 news.

After graduating with the Polk High School Class of 1990, as she was not cut out for college, she originally studied at a local modeling school[33]. The skills she learned there helped her get some jobs, such as modeling for the new Allante and becoming Miss Weenie Tots. Eventually, the school was shut down after they moved upstairs from their original location, but none of the models could find it[23]. After trying out several different careers, such as waitressing and playing "The Verminator" for a theme park and pest extermination company, she went back to school for acting, studying at the Larry Storch School of Acting.

By the end of the show, she had several acting roles under her belt, most notably as Lila, the Romantic Roast woman and as the princess in the short lived Princess Kelly Show. She also studied massage therapy, but ended up injuring Bud due to her very limited amount of training.

Kelly is known for her stupidity and promiscuity, both of which are routinely mocked by her family, particularly Bud. She has had a prodigious amount of partners throughout the series, and is generally considered very beautiful, although her choice in men appears dubious, with most of them ending up beaten up and kicked out by Al.

Her intelligence is also the topic for insult, although the extent of her stupidity appears to be fluid, varying from episode to episode, season to season. She originally appeared to be of fairly average intelligence, albeit not very keen to put it to use, though later seasons amped this up to her being unable to grasp common concepts, let alone read properly.

According to Bundyology.com, the exact point where Kelly is first shown to have been dumbed down is in the season 2 episode, "Guys and Dolls", when Bud was able to make her believe that the story Robinson Caruso takes place on the same island as the television show Gilligan's Island and later, Edgar Allen Poe's The Raven with the television show, The Addams Family. Although for the rest of season 2, she seemed to be back to having average intelligence, from season 3 onward, her stupidity would be amplified in various episodes, as Kellyisms were introduced and she would be seen accidentally bumping into the wall or tripping and falling onto the floor, or even forgetting what was she was just thinking about.

It is implied in the show that she was fairly intelligent as a young girl, as well as a voracious reader, but that a head injury during a car trip reduced her intelligence. Despite this, Kelly does show moments of very high intelligence, or at least street smarts on rare occasions.

Although she is usually portrayed as dumb, she does show that she is actually knowledgeable in math and physics, such as in T*R*A*S*H, when she is able to precisely calculate the trajectory to launch trash in to the D'Arcy's attic with a catapult and in Cheese, Cues and Blood when she is demonstrates her knowledge of angles in a game of billiards.

It was also pointed out by Bud that her memory is rather limited, meaning that for every new fact she learned, she would completely forget another fact that she had previously learned. This was first mentioned in season 3's "Here's Lookin' at You, Kid" when Bud tried to help her study. It was brought up again in the season 8 episode, "Kelly Knows Something", which proved fatal to her Dad's hopes for a new TV when Kelly appeared on a sports trivia quiz show.

Kelly was portrayed to be fairly popular in high school, and also appeared to be a bully and a "mean girl", similar to Al, who himself was both popular and a bully in his youth. She did not take school seriously, as she was often portrayed as ditching classes to hang out with friends or hide her report card since they often had low grades.

Kelly seems to be close to her father and even as an adult, she still addresses him as "Daddy" instead of "Dad", although at times, she wishes that he was not her father. Likewise, as much as Al wishes that he wasn't married or had kids, he care about her, as he usually calls her "Pumpkin" and is willing to do whatever it takes to make her happy.

Kelly also appear to be close to her mother, though she is often willing to point out the times that hasn't been a good mother. The two of them have multiple things to bond over such as talking about and ogling men, not wanting to work, and even going to the strip club together.

Bud and Kelly fight frequently, and constantly mock each other, with Kelly typically mocking Bud for being a virgin with acne and a blow up sex doll, while Bud mocks her for being incredibly dumb and promiscuous. Kelly frequently punches and shoves her brother. Despite this, Kelly does love Bud or at the very least is willing to defend him. When a popular girl named Heather McCoy pulled a prank on him once again at homecoming, Kelly got revenge on his behalf, by leaving a nearly naked Heather tied up in the school hallway with a sign that read "Don't Mess with a Bundy".

Kelly Bundy is generally considered a very beautiful young woman. She has long blonde hair, and a propensity for revealing clothing. In later seasons however, she keeps her hair shorter, and dresses more modestly, since she eventually matures and starts living life as an adult.

Appearances on the show[] 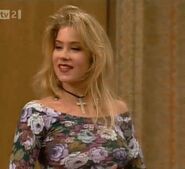