Married with Children Wiki
Register
Don't have an account?
Sign In
Advertisement
in: Organizations, NO MA'AM, Season 9

To stop feminism and progressive ideology from corrupting society

Garage inside the Bundy Residence

Church of NO MA'AM
The Jiggly Room
Chicago Cleavage

"Live Nude Peg" (Season 11)
NO MA'AM (National Organization of Men Against Amazonian Masterhood) is an anti-feminist group founded by Al Bundy in response to Women's Bowling Night replacing the Men's, and the nudie bar being turned into a Women's Coffee House.

The organization was established with the intention of advancing a political agenda to prevent feminist domination, but was often just an excuse for its members to gripe about society, consume alcoholic beverages, partake in illegal activities and play sports (with varying degrees of success). The organization's primary nemesis is Marcy D'Arcy, the wife of secret member Jefferson D'Arcy, who founded the feminist group F.A.N.G. (Feminists Against Neanderthal Guys) out of spite towards Al and NO MA'AM. and they have often suffered setbacks of various types due to her actions and their own stupidity.

NO MA'AM began after it was discovered by Al Bundy and some of his friends that their Thursday night bowling night at Jim's Bowl-A-Rama had been replaced with a Women's Bowling Night, and that the nudie bar had been turned into a coffee house. One of their first actions was to take talk show host Jerry Springer ("The Masculine Feminist") hostage, and issue a series of demands on the air. It was during this time that the group had their first encounter with the club's chief nemesis Marcy D'Arcy, who had them arrested for their crimes. ("NO MA'AM")

After Al loses his parking space due to insulting a fat woman, the group seeks out Ironhead Haynes for advice. The feat proves useless when Haynes tells Al that there is nothing he can do about the changing times, forcing Al to use Haynes's guitar and a bag of flour to create a series of commandments. The group promptly burn the commandments, not wanting to burn their issues of Victoria's Secret for warmth. ("The Legend of Ironhead Haynes")

In response to a protest organized by Marcy D'Arcy -- which came about after Al banned a woman from the shoe store for breast feeding -- NO MA'AM staged a counter-protest of their own, which was covered by the media and dubbed by Miranda Veracruz de la Hoya Cardinal ("Sucklegate"). The group's protest consisted of the men from NO MA'AM's "Heavyweight Division Company" removing their shirts, and dancing to the song, "Maniac" in order to scare the women away. The protest ended after the boys were cited for indecent exposure (in which one member got two tickets due to his large size). ("Business Still Sucks, Part 2")

NO MA'AM forms their own baseball league in response to the Major League Baseball strike, but their league ends up on strike as well, when it is discovered that the owners of the teams are making a profit from the games, which the players see none of. ("A Man For No Seasons")

When Marcy D'Arcy's Women's group is able to get Al's favorite show, Psycho Dad, canceled, NO MA'AM protests at their local TV station, despite the cold temperature and massive snow fall Chicago had endured recently. The protest was not legal, and the group were nearly arrested by officer Dan, before he discovered what the protest was for and joined in. Finding themselves cold, and the protest useless as there was no media attention, the group gives up and head for Ike's heated garage to drink beer. Moments later, however Miranda Veracruz de la Hoya Cardinal arrives to the scene, but is unable to find any evidence of the protest save for name Al "mysteriously written into the snow". Later, the group watches the actor who portrays Psycho Dad renounce the character and quit the show, upon which Al Bundy decides NO MA'AM must go to Washington, D.C. to appeal directly to the senate. Jefferson D'Arcy's mysterious apparent Secret Service contacts (he is addressed by the codename "Bullwinkle" and responds to "Chopper" and "Geronimo" in shorthand, essentially issuing orders, which they simply follow) make this impossible dream a reality. ("I Want My Psycho Dad: Part 2")

NO MA'AM decides they must find a new official beer, but after a night of drinking they ultimately decide to stick with the original one. (MWC: "And Bingo Was Her Game-O")

In order to obtain tax exempt status, NO MA'AM forms a church with Al Bundy as the reverend, the church is able to gain a national following, despite attempts by Marcie D'Arcy and Miranda Veracruz de la Hoya Cardinal to expose the group for what it really was; a illegitimate excuse to not pay taxes. The Church of NO MA'AM quickly fell apart when Marcie was able to provide evidence that Al had recently took his wife, Peggy Bundy out on a date and had a good time. ("Reverend Al")

NO MA'AM once visited the Just Store in order to acquire snacks for the planned event of watching Wrestling. After it is discovered they must watch the event on Bud's TV, as the wives are watching Old Man Older Woman. During this time, Bud is accepted as a NO MA'AM Pledge, and is told to get a picture with the wrestler King Kong Bundy. The next night, on Halloween, the group once again intended to watch Wrestling only to find the wives were watching an earlier, louder broadcast of Old Man, Older Woman. Despite the initial setback, they were able (along with the wives) to watch the wrestling event, but soon discovered the match had turned on their wives, and as a result of "that wrestling on TV leads to wrestling at home. And that ultimately leads to sex with the wife.", the group ceased to watch wrestling, and changed the name of the organization to "Numb Old Men Anxiously Awaiting Morticians". This decision apparently also results in the rejection of Bud's potential membership into the organization. ("Flight of the Bumblebee")

Membership into NO MA'AM has been described to be exclusive, as they have high standards to hold. Those who wish to join must endure several rites of passage, and/or a challenging labor, "something really, really stupid that benefits no one"[1] to prove they are worthy of membership.

Those who wish to join the group are designated as either a NO MA'AM Pledge or NO MA'AM Plebe[1], as they have yet to perform any ritual to earn them the title of "member".

As described by Al, the initiation rights for Griff included:

In contrast, in "Flight of the Bumblebee" , Bud's potential membership simply hinged on him getting a photograph with the group's idol King Kong Bundy, which eventually turned into him trying to survive a wrestling match with the professional wrestler. Though, despite getting the photo, Bud was rejected after the group had to "wrestle" with their wives after they were turned on by watching wrestling on TV.

Upon successfully completing the initiation rights, the plebe is designated a full fledged member and given the following right and benefits: 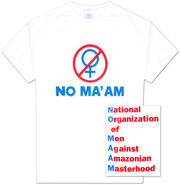 The official NO MA'AM (National Organization of Men Against Amazonian Masterhood) T-Shirt.

Al Bundy, the founder of NO MA'AM, "getting down to business at hand" in another meeting in his garage.