Married with Children Wiki
Register
Don't have an account?
Sign In
Advertisement
in: Character, Main Character, Wankers,
and 6 more

Katey Sagal
Margaret "Peg" Bundy (née Wanker, AKA Peggy) is the wife of Al Bundy, mother to Kelly and Bud, and self-described housewife of the Bundy household. Peggy is notorious for her laziness, once being described as "the laziest bitch in Chicago", for her promiscuity (which she may or may not have passed on to her daughter Kelly Bundy) and her expensive tastes, often purchasing extravagant items that will take her husband Al years to pay for. Despite this, Peggy has often tried to be a caring mother to her children (although through her own ways and not so obvious), a loving wife (despite constantly insulting Al, and refusing to cook for him) and a friendly, helpful neighbor (albeit with a sometimes lackluster attitude, and appearing uncaring). As she is a part of the Bundy family by marriage, Peggy has been described by her husband, Al, as being a part of the Bundy Curse.

Peggy is a lazy, self-indulgent housewife who refuses to cook or clean for her family, and tries to steal wallets or purses from Al or neighbors. She is known for dropping her cigarette ashes in her dinners. She prefers to purchase new clothes instead of washing the old ones. According to Peggy, her laziness is a Wanker tradition going back to pioneer days; while the Wanker women were getting their hair done, the men got theirs scalped.

Despite her refusal to work, Peggy has brief stints at employment, with mixed success, such as a sales clerk at a department store, a Mary Bright consultant (could not convince customers of the superiority of her goods), fast-food worker (forced to take the job by Al in order to work off a debt),Stripper (trying to seduce Al) and a cartoonist (decided to retire the cartoon when women began to consider Al sexy).

During the first season of MWC, Peggy was shown to have some culinary ability and was able to cook actual meals for the family (though on occasion, Al and the kids would feed it to Buck rather than actually eat the meal). But, from season 2 onward, she was shown to be rather lazy and inept, mistaking the dishwasher for the oven while trying to cook steak for Bruce, having a breakdown while attempting to make crowned rack of lamb or leaving strands of red hair in the cookie dough she had Marcy help her with.

Her lack of cooking skills usually left Al and/or the kids starving and Peggy either going out by herself or relying on Marcy to help her. Though, she has shown some ingenuity and made use of Tang for the family, such as Tangwich and TangBonBon. In rare cases, she would cook a full course meal for Seven (while leaving Al and Kelly with a single piece of Lucky Charms) or to tempt Al in exchange for sex, before realizing that cooking for hours for five minutes of sex isn't worth it. In other episodes, she worked hard to make a meal for Al, only for him to suffer from botched dental surgery or being impaled on the Cart of Death by Peggy, leaving him unable to enjoy the meal she made.

Likewise, when it came to typical housework, such as cleaning and laundry, she was also inept. She would often leave the mess as is or rely on Marcy again.

In the season 11 episode "The Stepford Peg" she gets amnesia by slipping on a bonbon and hitting her head. This causes Al to re-program Peg to be the kind of housewife that he always wanted. She is then shown doing actual housework like cooking and cleaning, much to Al's delight. This doesn't last long and Peg goes back to being herself.

Peggy's activities include sitting on the family couch, watching daytime talk shows (including Oprah Winfrey) and a shop at home network while eating tons of Bonbons (somehow without gaining any weight).

Despite her inappropriate behavior, she generally appeals to men, including Al, still, in spite of his snide sarcastic comments where he acts like the contrary. Like Al, she would never cheat on her partner, but unlike Al, she enjoys marital sex, despite constantly complaining about Al's lack of endurance. She doesn't seem to mind her husband ogling other women, reading pornographic magazines, or going to strip joints. This is probably because she does the same thing by going to male strip clubs and ogling other men. Her enthusiasm has caused some of the male strip joints she visits to establish the "Bundy rule," where women can no longer go into the back rooms to meet the dancers.

Al Bundy - Peggy's Husband. She and Al are often at odds. Al resents Peggy due to fact that she steals his money, does absolutely no work around the house and her constant nagging and complaining about his failures. He was stuck at his job as a women's-shoe salesman and driving a beaten-down Dodge. Al also resents Peg for never cooking for him, but the spousal neglect and abuse doesn't stop there, Peg also steals Al's money to spend useless trinkets all on herself leaving Al with nothing to eat. Peg meanwhile often gorges on junk food outside like Denny's, Burger King and pizza delivery with no regards to how hungry Al could be. Whenever Al rebukes Peg and orders her to change her ways and be more productive especially by cooking for the family, she has the tendency to ignore what Al says, try to change the topic, simply beg for more money, exaggerate how hard she really does work or even walk away. Despite all the problems, they do love each other and though Al has had opportunities to sleep with other women, he will refuse.

Kelly Bundy - Peggy's Daughter. Peggy is usually teaching Kelly life lessons. Kelly takes after Peggy as both are lazy and try to trick men into doing what they want.

Bud Bundy - Peggy's Son. Peggy is shown to often treat Bud like a little boy and usually embarrasses him. She also is not above making fun of him for his inability to get women like the rest of the family does.

Seven - Peggy's nephew, who lived with the Bundys for a short time after his parents abandoned him, leaving him in their care. During his stay, she treated him much better than her own husband and children, making Al, Kelly, and Bud jealous.

Marcy Rhoades D'Arcy - the Bundys' next-door neighbor. Though she and Marcy are close friends, Peggy will often lie, betray and humiliate Marcy without hesitation in order to gain something.

Steve Rhoades - Marcy's first husband; he left her to become a forest ranger. She was amused to watch him try to win over Marcy. When she learned of the reward on him, she tries to turn him over but Al hides him even stopping Peg from alerting the cops, showing that he truly did value Steve as a genuine friend.

Jefferson D'Arcy - Marcy's second husband, who she met at a party and married while intoxicated. He is a male version of Peggy, both are lazy and prefer not to work, the difference is Marcy wants Jefferson to stay home and have him be her gigolo while Al wants Peggy out of house and doesn't want to sleep with her. Peg sees him as idiot but does acknowledge him as a friend, being amused by his drama with Marcy.

Peggy Bundy was played by actress Katey Sagal, whose real life pregnancy had been written into the series during season six. When the actress suffered a miscarriage, the pregnancy storyline was written as a dream of Al's, as it was felt it would be too traumatic for Katey Sagal at the time to work with an infant. Her later pregnancies would not be written into the shows, using either camera angles or off-camera appearances by the actress to work around them.

Appearances on the show[] 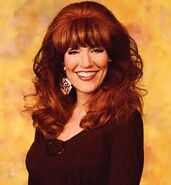