"Dud Bowl II"
Polk High School is the fictitious high school that the Bundy family attended in Chicago, Illinois. It is named after the 11th U.S. President James K. Polk.

Its high school football team is the Polk High Panthers.

The cheer leading team is known as the Polk Dots.

The Polk High Anthem is the school anthem that Al and Aaron know by heart.

Al Bundy and Peggy Wanker met at some point during the 1960s at the school. Although Al and Peg went to high school together, she technically did not graduate until 1990, after she had failed Home Economics and did not bother to attend mandatory summer school to fix this.

Al and Peggy's children, Kelly and Bud, attended the same school between the late 1980s and early 1990s. In season 4, Bud and Kelly are seen talking to each other in the hallway between their classes. The school also hosted Kelly's five year high school reunion.

Later, Al's co-worker, Aaron Mitchell, reveals that he also played football at Polk High and is awestruck at meeting Al, after hearing about his legendary football record and drilling 4 holes into the girl's locker room.

After Kelly is forced into the Tap Dance club at school, Al mentions having to talk to the school principal, Mrs. Wicker, was also his and Peggy's principal. He also mentions that she remembers Peg as "The Big Easy".

In Ride Scare, Al is shown standing at the football field, which is now covered with junk and trash.

In Dud Bowl II, the Polk High football field and scoreboard is renamed to "Al Bundy Field" after some intervention from former NFL star (and Polk High Student) Terry Bradshaw. 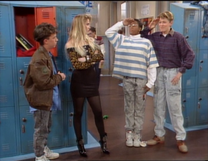 Bud and Kelly by the lockers 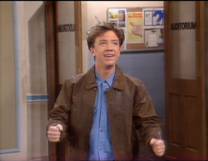 Bud in front of the door leading to the auditorium 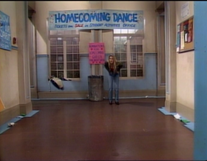 Kelly in front of the hall 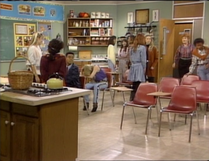 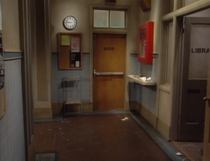 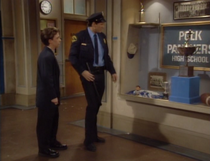 Trophy case by the lockers 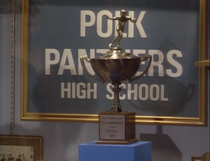 Trophy from the 1966 All-State Game 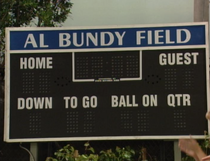 The scoreboard that has been renamed to "Al Bundy Field" 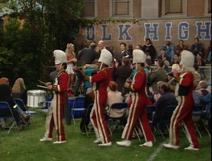 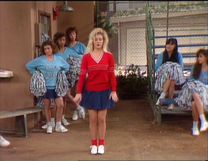 Bleachers by the football field 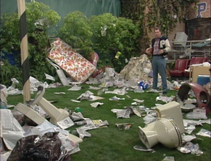 Al showing how the field has been covered in trash 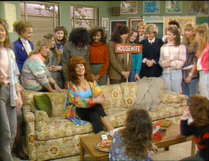 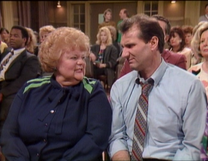 Al trying to compliment Mrs. Wicker in the auditorium 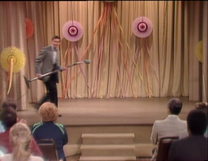 Auditorium stage
Add a photo to this gallery
Retrieved from "https://marriedwithchildren.fandom.com/wiki/Polk_High_School?oldid=21778"
Community content is available under CC-BY-SA unless otherwise noted.