Married with Children Wiki
Register
Don't have an account?
Sign In
Advertisement
in: NO MA'AM, Fictional TV shows

Psycho Dad is a fictitious character and television show on PBS that Al Bundy and the members of "NO MA'AM" (except for Griff) idolize. The show was later brought to Fox as The New Adventures of Psycho Dad (Kelly Knows Something).

Andrew Prine plays the actor (playing Psycho Dad) who is not named on MWC. The actor describes the show as "a simple saga of a guy run amok in the Old West". Psycho Dad appears to have a son whom he cares about.

As there is no footage of the actual show, it can be inferred from the show's lyrics and what Al has said about the character that he:

In the third issue of the short lived Married with Children comicbook series (1991), titled Psychodad, Al is seen watching an episode of Psycho Dad (before himself going crazy). In the comic, Psycho Dad is depicted as a middle aged balding man with crazed red eyes, a menacing grin, yellowing teeth and is either drooling or foaming at the mouth. In the short scene we see, he shoots his two children, (a son and daughter who appear to be between 5 to 7 years old), because one of them was about to hide his gun before asking for a raise in his allowance. Feeling no remorse or guilt, Psycho Dad immediately resorts to adoption.

Later, after Al goes crazy and walks to the basement to get his gun, he sings a varation of the Psycho Dad theme to himself that claims Psycho Dad escaped from an asylum, did time in the pen, and kills for fun. In a style similar to Jacob Marley, the ghost of Psycho Dad haunts Al and reminds him that due to his countless repeated crimes, he got the electric chair in the final episode, and that Al will have to endure that same fate if he kills his family. He then tells Al that instead of killing his family, he needs to man up and find a way to get even. 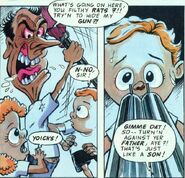 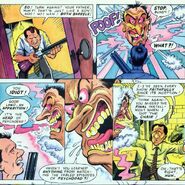