Married with Children Wiki
Register
Don't have an account?
Sign In
Advertisement
in: Season 3, Season 7, Season 8,
and 2 more

The Little Engine that Could 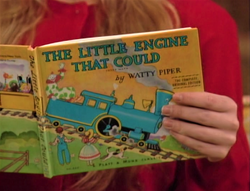 The Little Engine that Could is an American folktale that became widely known in the United States after it was published as a children's book in 1930. It tells the story of the little engine that, despite its size, triumphantly pulls a train full of wonderful things to the children waiting on the other side of a mountain. One of the story's most quoted lines is "I think I can. I think I can. I think I can.". The story is often used to teach children the value of optimism and hard work.

On Married... with Children, it is the subject of the season 3 episode, "He Thought He Could".

It is the book that Al Bundy had to return to the Oak Wood library run by Miss DeGroot. She originally lent it to him as a child in 1957, in the hopes that he might amount to something. As he is decades overdue, the fine comes to more than $2000, but Al manages to distract Miss De Groot and slip it back on the shelf - then he "finds" it. Unfortunately for him, the building has security cameras and his actions are caught on tape and shown on the evening news, making his family and neighbors ashamed of being associated with him. It also leads to him becoming "the Freddy Krueger of the library system". The action of stealing a library book is also named after him, as a kid warns his friend "Hey, man! Don't Bundy that book!".

The book is also seen in the season 8 episode, "Sofa So Good", when Kelly convinces Bud that to let her have the house for the night (as Al and Peggy are in Wanker County) as she will be shooting a commercial there. The commercial is about teaching children the importance of reading and she will be reading "The Little Engine that Could" to them. She is seen reading the book out loud but after Bud leaves, her true plan is revealed and her boyfriend, Gunther arrives. Unfortunately, he accidentally burns down Peggy's couch with his cigar. After Bud arrives home and sees the damage, he asks who can inform Peggy that Kelly has just torched her beloved sofa, and jokingly says "I think I can. I think I can. I think I can.".

In the season 7 episode, "You Can't Miss", Bud asks the host of the game show, Adam, if he could make a final plea to Candy to choose him over Rodrigo. Adam chuckles and says "Well, talk about the little engine that could".

In the season 10 episode, "Al Goes to the Dogs", after Bud suggests that Kelly could use a pinada full of condoms to get the attention of Carlos, Kelly tells Bud "No, Little Engine that Couldn't'!'".

Kelly attempting to read the book in "Sofa So Good"
Community content is available under CC-BY-SA unless otherwise noted.
Advertisement